Victor is a true entrepreneur and works as an advisor to Double Healix. He started and leads various businesses, such as Uncover, in which he leads an international team (uncover.com), and Sherlocked, a successful business which builds escape and breakout rooms (www.sherlocked.nl). This fits excellently with his playful spirit and his desire to give people an experience in which they can unravel exciting mysteries. From a young age, Victor has helped work on the family business which would later be called Double Helix.

After secondary school and preparatory education for the film academy, he fine-tuned his acting and presenting skills, namely at the Royal Academy of Dramatic Arts in London. He gave presentations and workshops on topics around teamwork and leadership, using various film fragments. He is a big movie buff and is able to draw from his deep knowledge of thousands of films and documentaries in his workshops. He is a visual thinker and has made a number of short fictional films and documentaries. Based on the experience he gained from his own businesses, he now also gives many presentations about entrepreneurship and building physical games. Together with his father Manfred van Doorn, he wrote the book ‘This is the AND. The Future for Beginners’, for people who want to learn to surf on the big wave of societal changes AND want to be a wave-maker at the same time. Furthermore, Victor is a passionate climber, martial artist, and tango teacher. 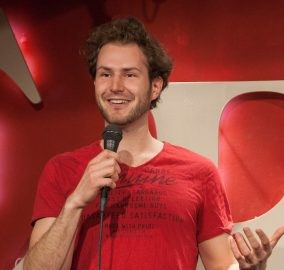